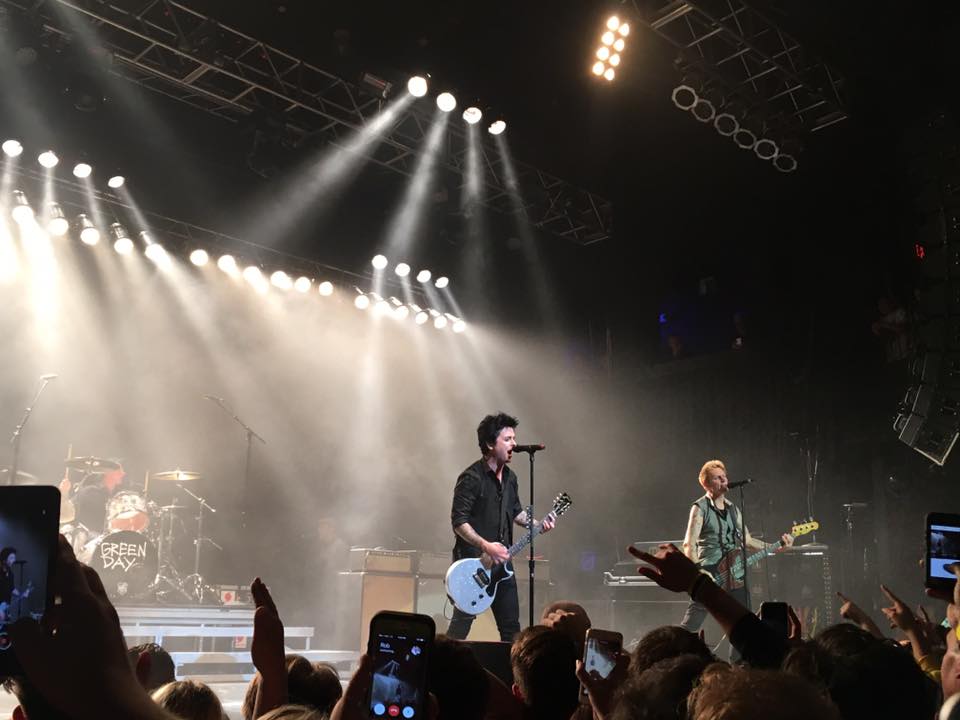 I’ve put a lot of thought into this subject and my mind constantly wavers. For a while, I thought, ‘just keep it about the music.’ However, when a band addresses controversial topics in their lyrics, there is no reason for censorship in between songs. Bands should be clear about their brand identity. Their lyrics, live performances, social media, and interviews should remain consistent. A band must decide if their brand identity includes politics and this decision becomes pretty permanent.

On October 1, I saw Green Day at a sold-out show at the House of Blues in Boston. It was my first time seeing Green Day live after what seems like a two-decade long courtship with their music. This long awaited first Green Day concert exceeded all of my wildest expectations. Green Day is currently running on their 11 date “Revolution Radio” U.S. club tour, which many fans refer to as a “warm-up tour” for their European arena tour dates in January. This tour is intimate, with a mere 2,200 fans surrounding me at the House of Blues, and the setlist was saturated with hits. The ratio of hits to deep cuts was higher than I had anticipated, but for my first Green Day show, I had zero complaints. The band played a whopping seven tracks from their critically acclaimed rock opera concept album, “American Idiot,” which might have been more than they played when they were touring for that album. “American Idiot” boasts obvious anti-war themes in light of George W. Bush’s presidency and the Iraq War.

One month before the dooming 2016 U.S. Presidential Election is possibly the best time to attend a Green Day concert. They performed both “American Idiot” and “Holiday” and I was able to hear these songs in an entirely new light. While shouting along to every lyric, I was almost left wondering, ‘were these songs actually written about this election?’ with the follow-up question, ‘are Billie, Mike, and Tré time-lords?’ One of Billie’s intermission speeches (which I am copying and pasting from Billboard) was, “Say no to racism, no to sexism, no to homophobia. Treat everyone with kindness. We see so much hatred 24 hours a day, but tonight we are gathered here because we want love and peace — and we want it now! Don’t fucking vote for Donald Trump!”

While cheering, I had a passing thought of, ‘wow, this is gonna piss a lot of people off.’ I then took a moment to assess the Green Day demographic. It made me wonder if there is a percentage of Green Day fans who do not agree with the messages Green Day promotes. I realized that the majority of my favorite musicians have political beliefs that align with my own. Is it a coincidence? I don’t think so. When searching for new music to listen to, we tend to find comfort in music that reflects our innermost feelings. Whether it is personal feelings about relationship or adolescent angst, or intellectual and political beliefs, it is human nature to seek out what resonates with us. I have to begrudgingly admit that I am a millennial. Many of my fellow millennials are jaded about politics. Sometimes we need a little push from Billie Joe Armstrong to get out and vote, especially in such a pivotal election.

It is not a band’s responsibility to talk about politics, but bands have every right to. Just remember that your favorite band is going to say some things you disagree with, and that’s okay. When you enter a concert hall, it’s easy to feel like you have escaped from reality. But the real world is still out there. Allow your favorite bands to open your mind about issues and don’t be afraid to take it with a grain of salt.